An increasing number of third party services are now being incorporated into today's web sites. In 2012, a typical web page contained an average of 13 third party scripts or "tags". Today, our Top 40 analysis of French e-commerce web sites shows that this number has risen to an average of 21 third party tags, an increase of 62%.

These third party services provide added value, with the promise of increased revenue (e.g. via advertising), higher conversion rates (through the use of retargeting tags) or a better understanding of user profiles (through embedded analytics).

But they also have a poor reputation when it comes to their impact on performance! A number of studies have attempted to prove this in the past (including studies such as those conducted by Instart Logic and NCC Group), and it forms a key part of the rationale behind ad blockers (a topic we will come back to in a future article).

We were keen to find out just how much of an impact these various third party widgets would have on the monthly web performance rankings published on JDN.

Does the number of third party tags have any impact on the performance of leading French e-commerce web sites?

We measured the number of third party tags used by the top 40 e-commerce web sites ranked by visitor numbers (the same 40 web sites that we analyse each month along with JDN). Below are the results for September 2016: 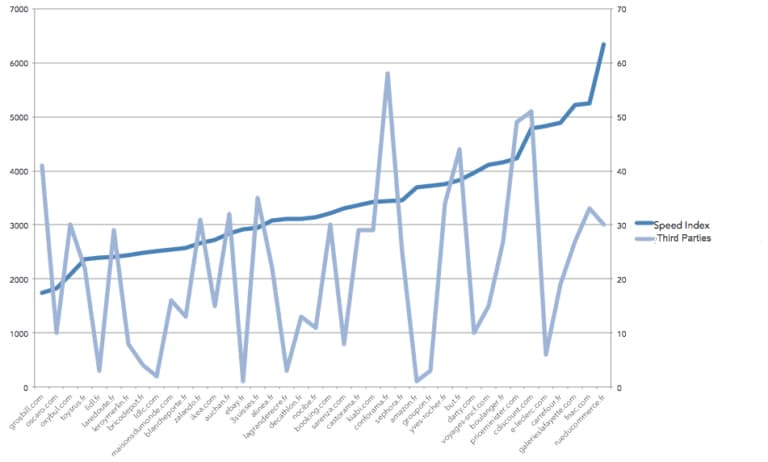 However, looking at the broader picture and comparing the average number of third party services used by the 20 highest ranking web sites (an average of 17.5) with the 20 lowest ranking (26.4 on average) reveals a considerable difference (an average difference of 8.9 third parties, or a 50% increase).

We conducted a similar test earlier (in summer). Below are the results for June: 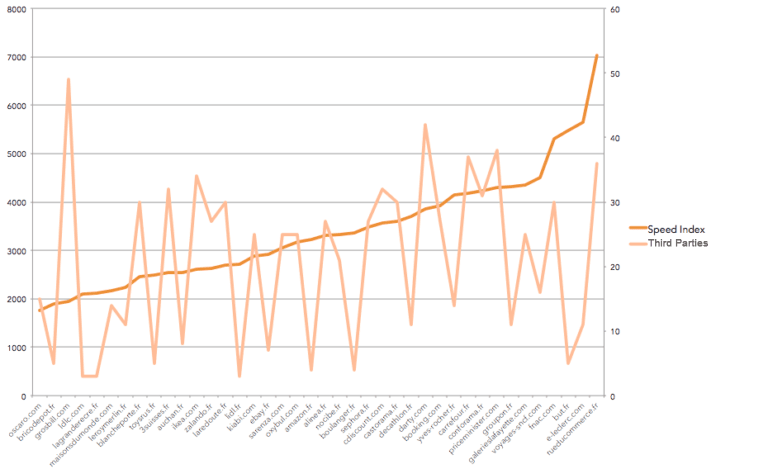 As a result, we were keen to examine the methods these sites use to implement such tags in more detail.

How much of an impact does the specific implementation of third party tags have on performance?

For this additional study, we concentrated on a few specific cases:

For each web site, we ran two tests:

To perform these tests, we used Webpagetest.org with an average-speed 7 Mbps ADSL connection. We configured the "blockDomainsExcept" script available from webpagetest and ran 3 sets of 10 consecutive runs.

A key finding revealed in this table is that the difference in performance is slight in the case of Oscaro, Grosbill and Leroy Merlin (these sites are among the 10 highest performing). This is despite the large variation in the number of tags (8 to 41).

Conforama, on the other hand, shows much greater variation when versions of its home page are compared with and without scripts.

Thus, in some cases, third party tags have a clear impact on loading time and user experience. But, as shown in the tests conducted on Oscaro, Leroy Merlin and Grosbill, this is not inevitably the case!
So what methods have these sites employed to maintain performance? And what could Conforama do to minimise the performance impact in their case?

Third party tag integration: good and bad examples when it comes to performance

What sets Grosbill and Oscaro apart from Conforama essentially lies in the method used to load the tags.
In the latter case, third party tags are loaded in line with the rest of the page. In the other two cases, tags are loaded last.

An example to avoid

Without third party tags, 85% of the page loads in 2.5 seconds, versus 0% in the original version.

In this example, third party tags block the rendering path and have a negative impact on user experience.

As we were explaining above, the degradation in performance caused by third party tags is not unavoidable. Sites such as Grosbill, Oscaro and Leroy Merlin are good examples of this.

Grosbill's page loading in detail
Let us explain this in more concrete terms with an illustration of how page loading proceeds for Grosbill's home page. The first line represents page loading with third party scripts excluded, while the second shows how the home page normally loads:

Oscaro's page loading in detail
Page loading proceeds in a similar manner for Oscaro's home page. Here is how page loading looks with and without third party tags:

Despite what you might think, third party tags do not always have a negative impact on performance (from a Speed Index perspective). This is due to a number of best practices that can be used to counteract any performance degradation: While the use of non-blocking third party scripts may only have a limited impact on loading times, it is important to remember that when too many third-party scripts are incorporated into your web page, there is a risk that these may not have loaded by the time the user leaves your web page. This poses a problem when it comes to any data fed back by these scripts. For example, consider a page that takes 10 seconds to load in its entirety but which appears ready after 4 seconds. The average time spent on this page is 6 seconds. Third party tags loaded via Google Tag Manager execute between the 3rd and 10th second.

In this example, a third of your third party content will not be executed. These tags are therefore not compatible with audience targeting, DMP segmentation or context-dependent content engines.

Here again, your IT or marketing teams will need to find a happy medium between "marketing and advertising performance" and "web performance" per se in order to serve customer discovery needs without compromising user experience.

Striking this balance is even more key when you consider that a survey by Ghostery revealed that 57% of IT and digital marketing leads have added more than 5 tags to their web sites over the past 12 months. What the survey also reveals is that 67% believe that their web sites contain third party scripts that they are not even aware of. 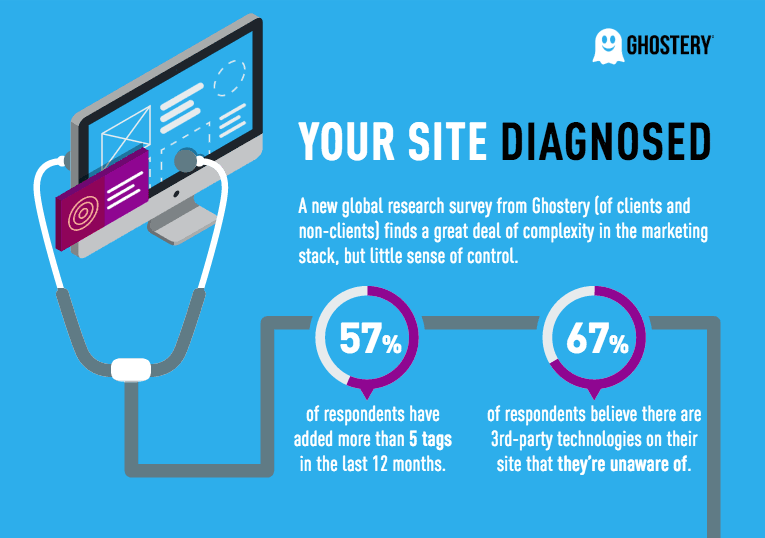 Maybe it's time to give your third party tags a bit of a spring clean?

Our thanks to Jean-Pierre Vincent for his invaluable assistance in conducting the tests described in this article.